The WVS studies the values of individuals, with questions covering as many as 290 topics including views on politics, economy, labor, education, religion, and family. The WVS was first launched in 1981 and Dentsu Institute has participated since the 2nd wave in 1990. The most recent survey is the WVS’ 7th wave.

For the 7th wave, the WVS collaborated with the European Values Study (EVS) to create a joint data set, and survey fieldwork was conducted from 2017 to 2021. Dentsu Institute and Doshisha University have conducted cross-national comparative analysis of 77 countries for which results had been compiled as of September 2020, and have identified 9 distinctive trends in Japan. This release presents Japan’s results with reference to its rankings among respondent countries, and it is necessary to note that as the number of respondent countries may differ from question to question—due to the fact that the WVS and EVS do not use entirely identical questionnaires, and that there are also cases among non-European countries where questions have been customized for the particular country—the number of countries from among which the rankings could be compiled varies between 45 and 77.

Note: Please also see the results of our time series comparative analysis for Japan only, published on April 27, 2020.
https://institute.dentsu.com/en/articles/34/

1. Work: Leisure time is prioritized. The importance of “work” is comparatively low.

2. Gender: Level of acceptance of “homosexuality” is high, ranking just after those in Europe and other developed countries.

3. Value of Freedom: The most importance is attached to “security,” followed by “freedom” then “equality.” Respondents feel they have a low level of “control” over their lives.

4. Media: High trust in the mass media. Japan ranks 1st of 48 countries in terms of respondents who “obtain information daily” from a “daily newspaper” or “TV news.”

6. Politics: Despite a high level of importance placed upon “politics,” political matters are not discussed. There is a tendency to expect the “government” to provide security but dislike “authority.”

7. Environment vs. economy: Many people struggle to choose between “protecting the environment” and “economic growth.”

8. Family: There is a tendency to trust “family” and consider it important, but a low sense of duty to provide long-term care for parents.

9. Next generation: Emphasis is placed on children learning qualities such as “determination” and “imagination.”

The Survey Results: Summary and Key Findings
While attaching greater importance to “leisure time” over “work,” Japanese respondents do not tend to perceive “less importance placed on work in our lives” as positive. Despite high levels of interest in “politics,” political matters are not discussed. Respondents expect the “government” to provide security, but dislike “authority.” Many Japanese respondents replied “don’t know” when asked to choose between “protecting the environment” or “economic growth.” These results showed numerous such cases where responses appear at first glance contradictory or respondents tended to avoid clear choices when asked. Behind these conflicts are the effects of the fact that the world is changing dramatically.

One of those changes is the growing pace of birthrate decline and population aging, and the survey results indicate that in Japanese society there is a low sense of duty to provide long-term care for parents, despite “family” being regarded as important. While this may be due to the increasing provision of long-term care services, whether it will be possible to maintain such a social system is a highly pressing question for Japan.

There is a glimpse of a forward-thinking orientation among Japanese respondents in the qualities they wish to see in their children, who represent the next generation. Namely, respondents want their children to prioritize post-industrial values such as “imagination” over traditional or industrial values such as “hard work.” We believe that we need to continue to pursue research that draws on comparisons with other countries to follow how people make choices based on their awareness in order to build a desirable society, despite the contradictions and conflicts they face.

As fieldwork for Japan and 66 of the 77 countries had been completed by 2019, it can be suggested that the spread of the COVID-19 pandemic in 2020 has had only limited effects on the results of this wave. However, aside from the effects of the pandemic, the world is in the midst of other significant changes, and it is for this very reason that such a long-term, worldwide attitude survey is useful for grasping such changes and envisioning the future. This is due to the close correlation between the shifts in people’s attitudes, values and behavior and the quality of society.

1. Work: Leisure time is prioritized. The importance of “work” is comparatively low.
Japanese respondents showed a tendency to attach importance to “spare time,” with the total percentage of respondents who “disagree strongly” or “disagree” that “work should always come first, even if it means less spare time” at 59.2%, ranking Japan 2nd among 77 respondent countries. Moreover, while the total percentage of those who responded that “work” is “very important” or “rather important” was at first glance high, at 81.3%, comparison with other countries revealed it was in the lower ranks, at 71st of 77 countries. However, the percentage of Japanese respondents who find “less importance placed on work in our lives” “good” was 10.5%—ranking low at 74th of 77 countries—indicating a tendency to regard work itself as important. 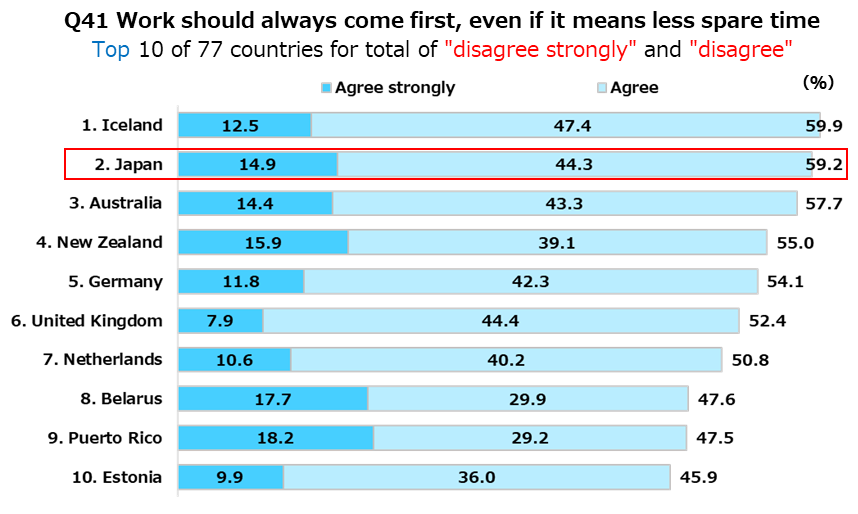 *As the totals in the graphs are calculated based on the actual numbers of respondents, they may not be consistent with the totals of figures before aggregation due to rounding off. For the same reason, countries’ rankings may differ even if their graph figures are the same. 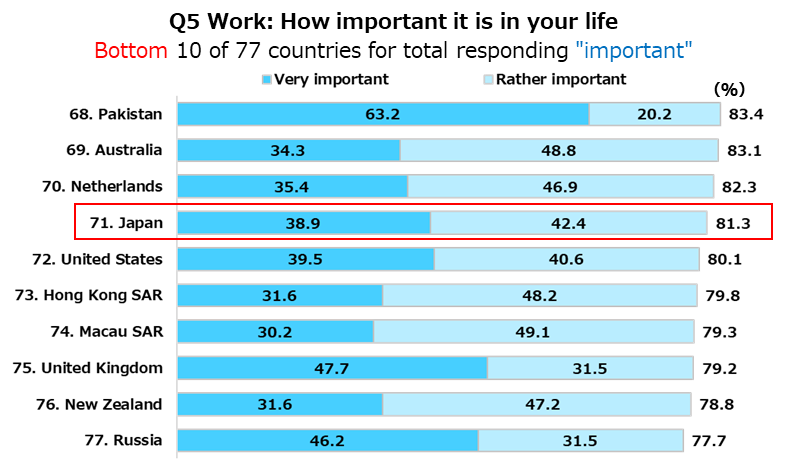 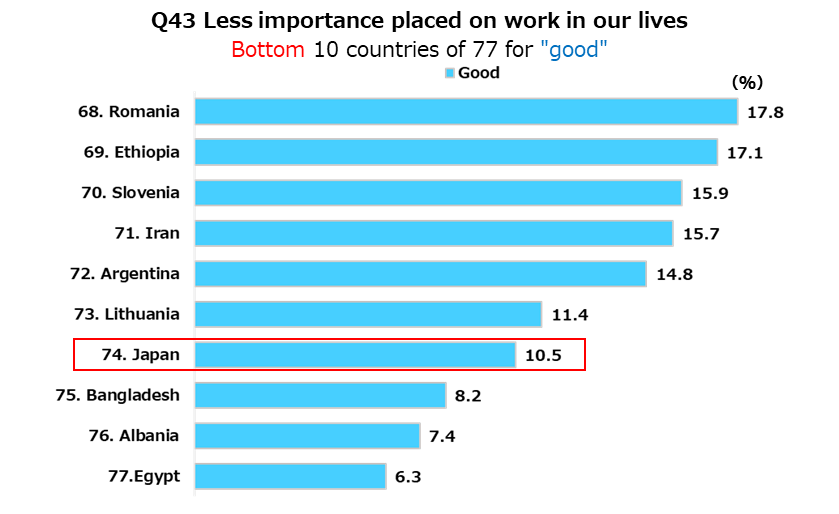 2. Gender: Level of acceptance of “homosexuality” is high, ranking just after those in Europe and other developed countries.
Japan ranks 18th of 75 countries in terms of its level of acceptance of homosexuality. With over half of respondents adopting a positive stance, the level is high, ranking just after countries of Europe and Oceania and other developed countries. 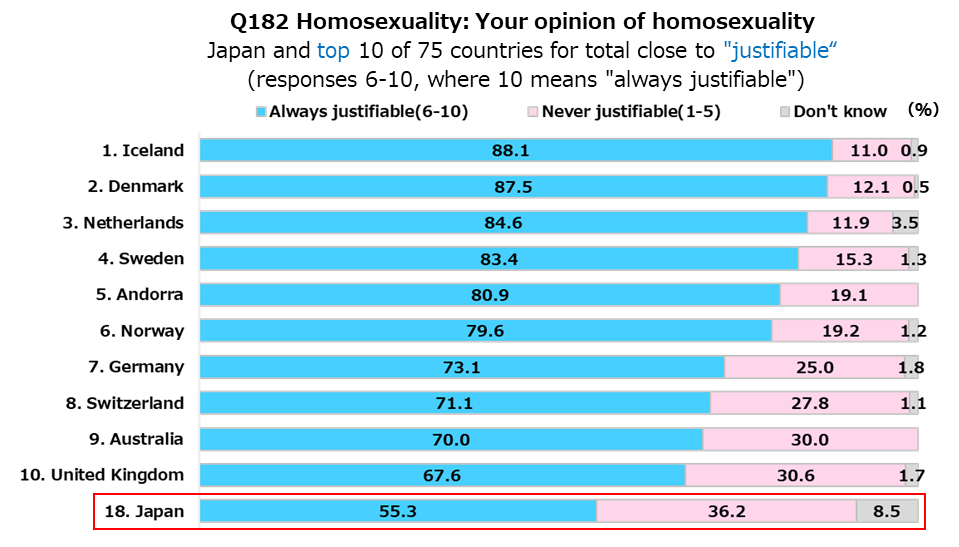 3. Value of Freedom: The most importance is attached to “security,” followed by “freedom” then “equality.” Respondents feel they have a low level of “control” over their lives.
When asked which of “freedom” and “equality” they considered more important, respondents in many countries around the world consider “freedom” important, while in the choice between “freedom” and “security,” the majority of countries saw a strong tendency to choose “security.” A similar trend can be seen in Japan, with a large percentage, 57.2%, selecting “freedom” in contrast with 34.2% selecting “equality,” and the great majority (82.3%) selecting “security” in the choice between “freedom” and “security.” On the other hand, the percentage of Japanese respondents who responded “no choice at all” regarding the amount of “freedom of choice and control” they feel they have over the way their lives turn out was 38.6%, ranking Japan high at 6th of 77 countries. 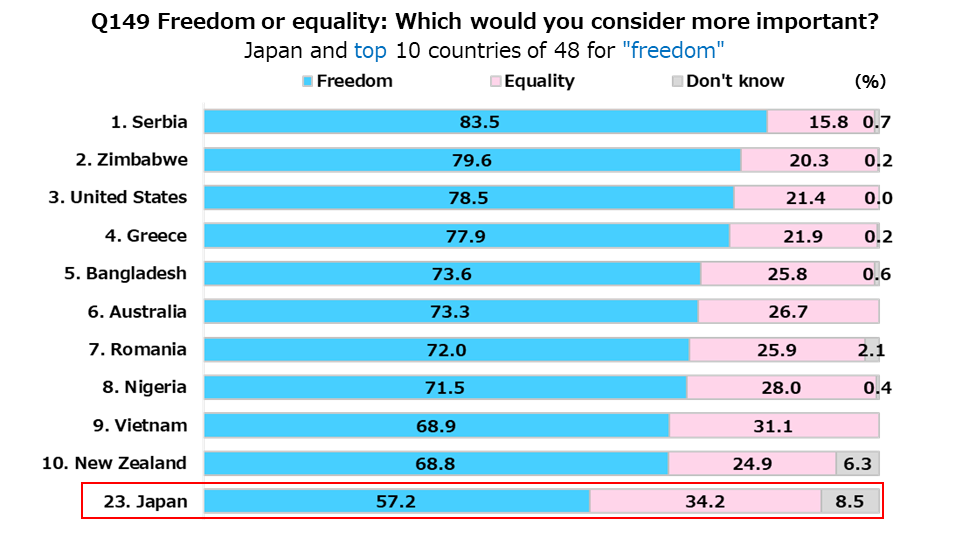 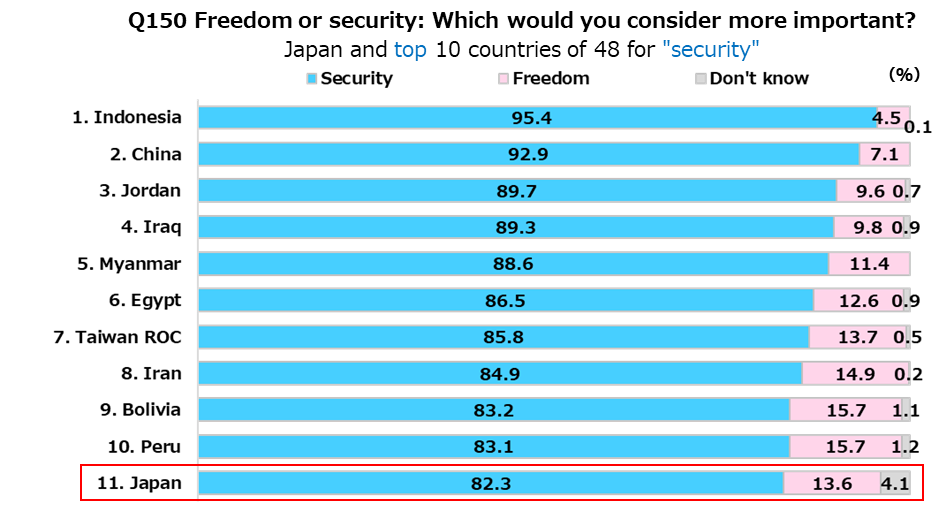 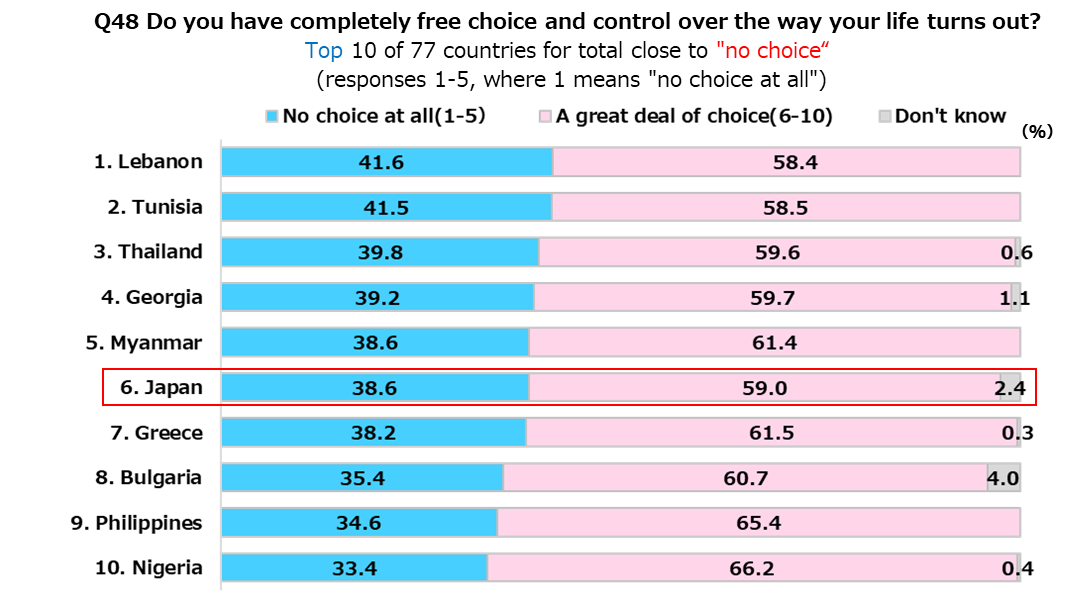 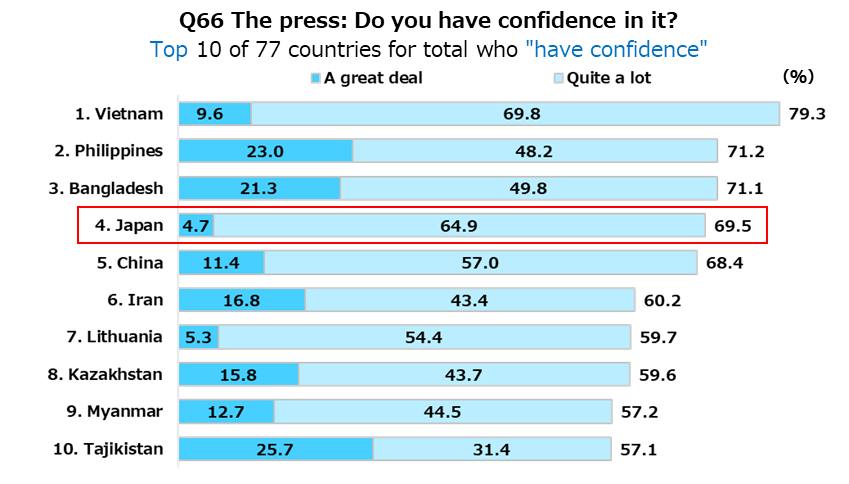 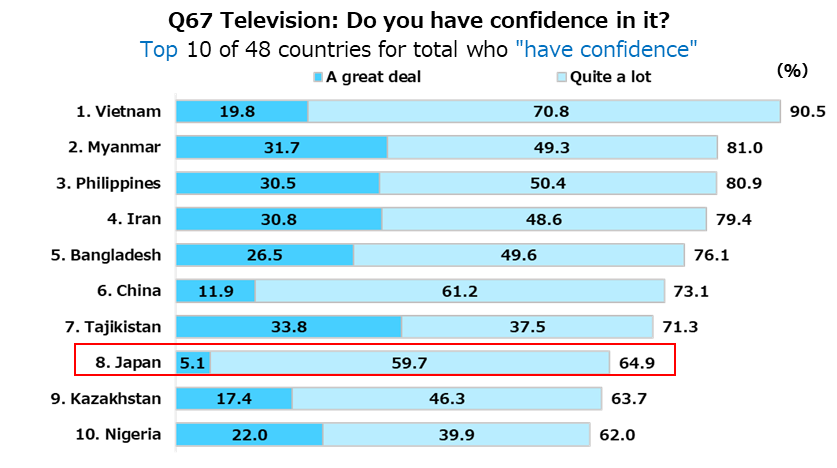 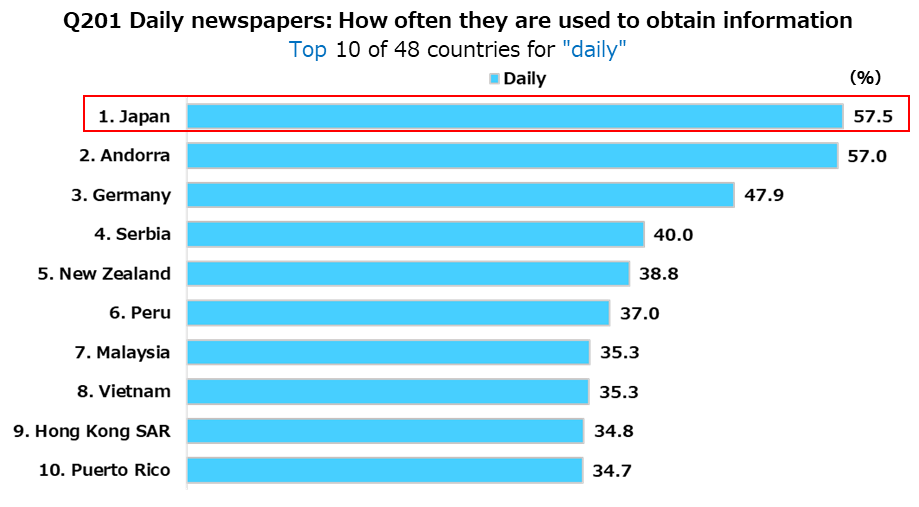 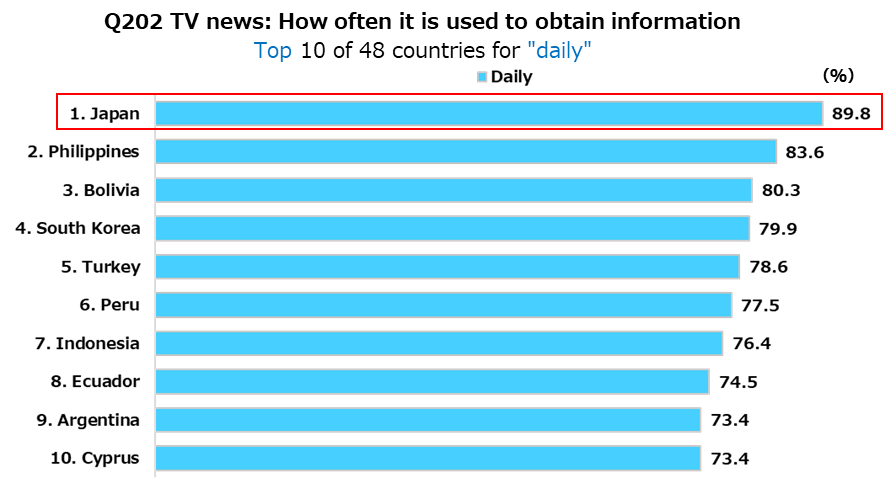 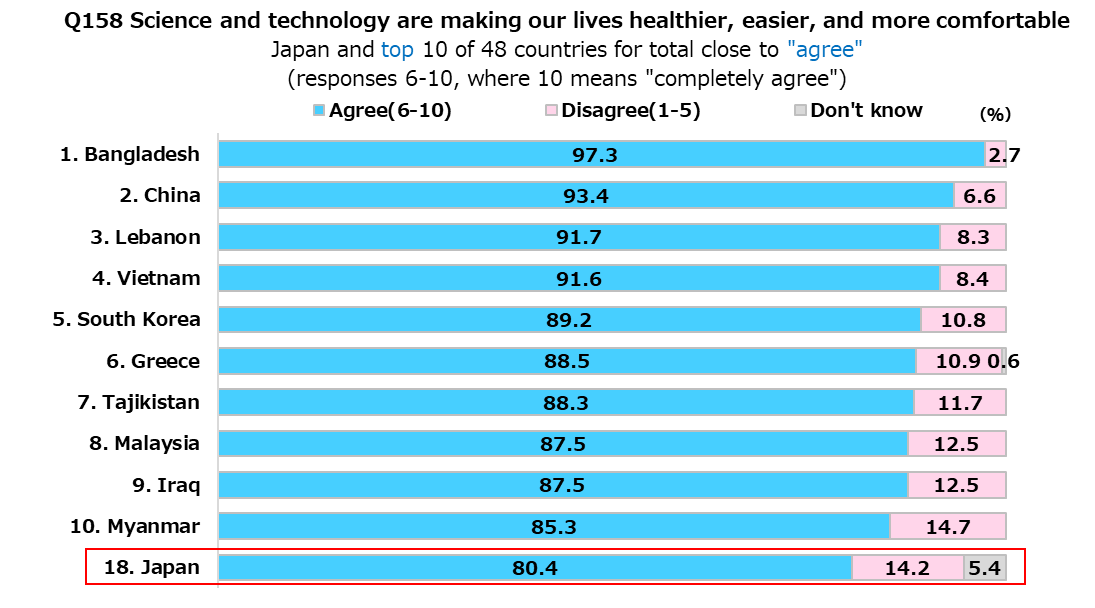 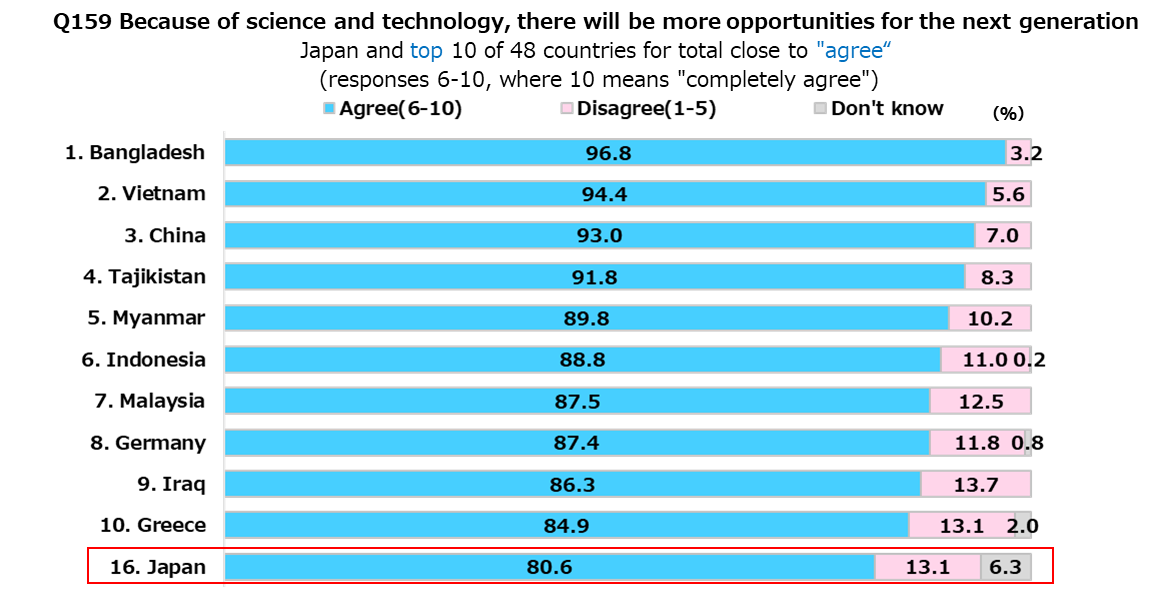 6. Politics: Despite a high level of importance placed upon “politics,” political matters are not discussed. There is a tendency to expect the “government” to provide security but dislike “authority.”
The level of importance of “politics” in Japan is high, with the total percentage of people who regard politics a “very important” or “rather important” aspect of their lives at 65%, ranking 6th of 77 countries. However, looking at the frequency at which respondents “discuss political matters” with friends, Japan’s total percentage for “frequently” and “occasionally” was 51.4%, ranking low, at 39th of 47 countries, indicating that in comparison with those in other countries, Japanese respondents do not tend to choose politics as a topic of everyday conversation. Japan ranks 5th among 77 countries in terms of the percentage of respondents who believe that the “government should take more responsibility to ensure that everyone is provided for,” showing a trend to expect the “government” to provide security. However, it would appear that many people are reluctant to accept authority, with a mere 1.9% of respondents finding a “greater respect for authority” “good,” the lowest percentage among 77 countries. 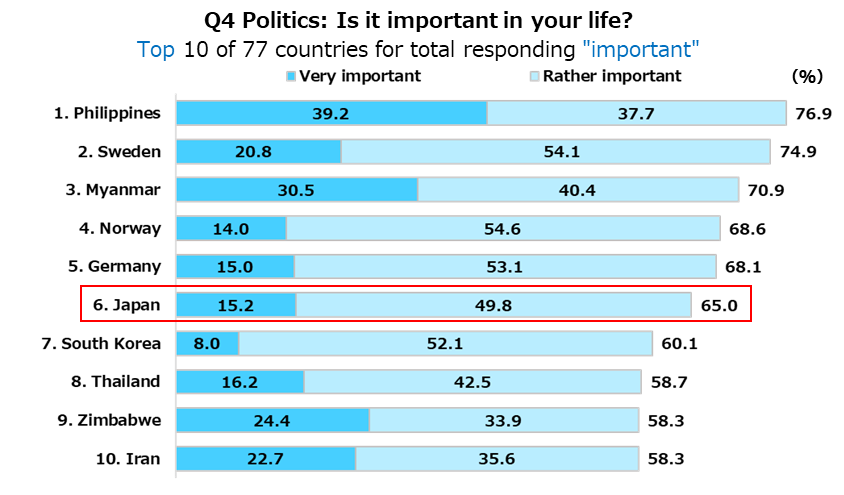 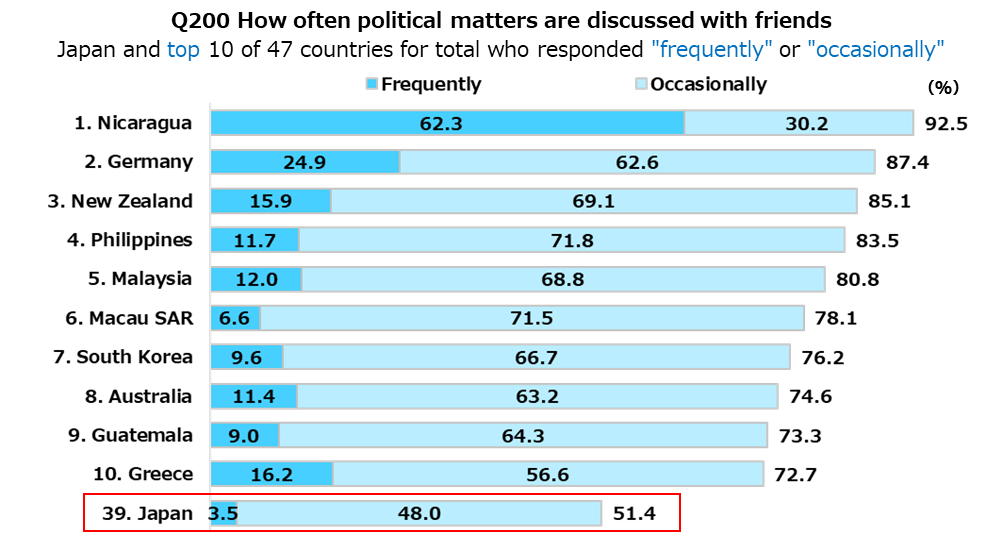 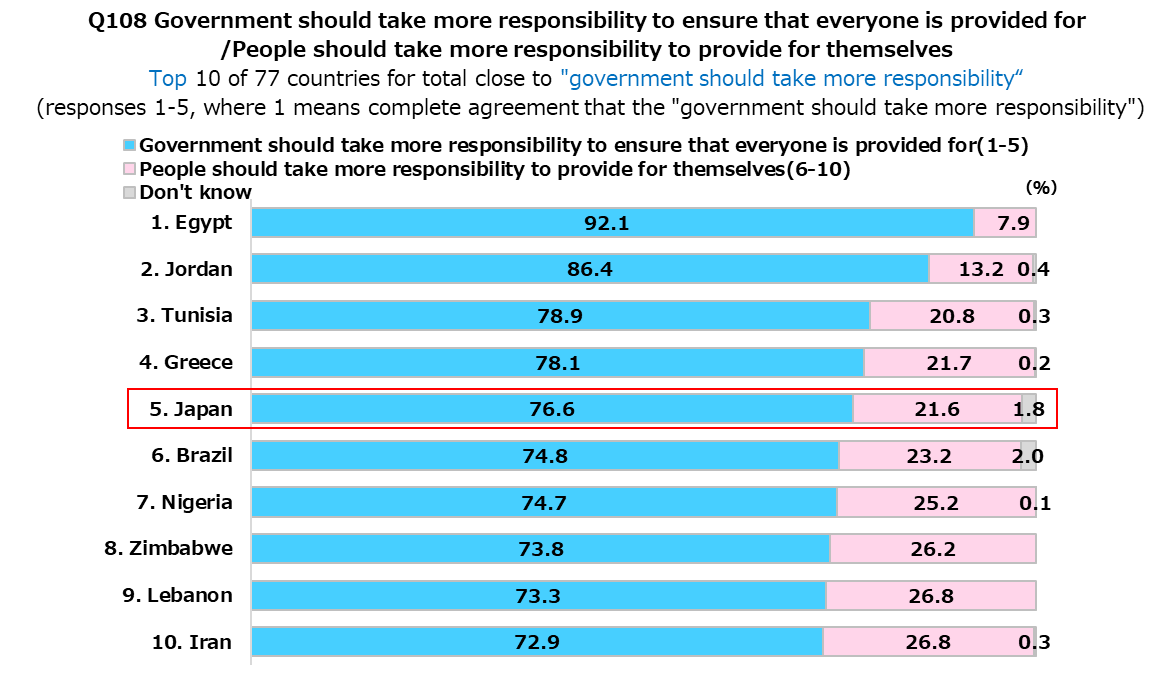 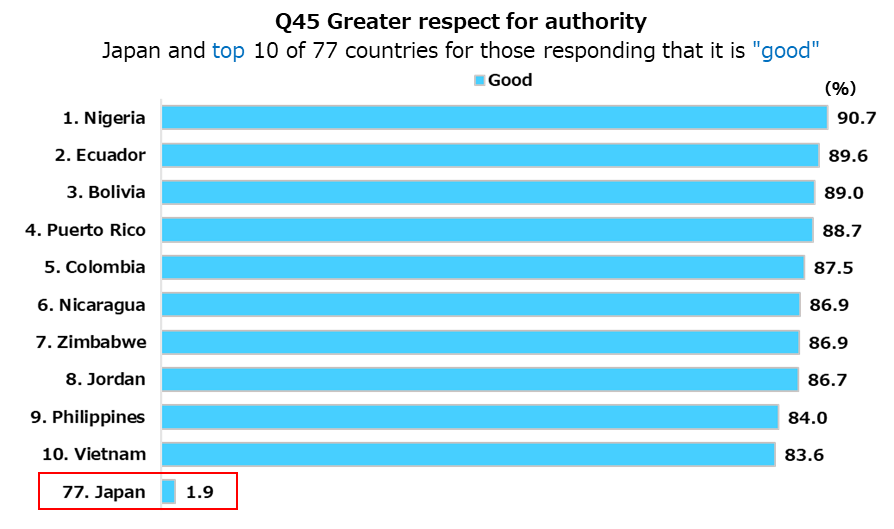 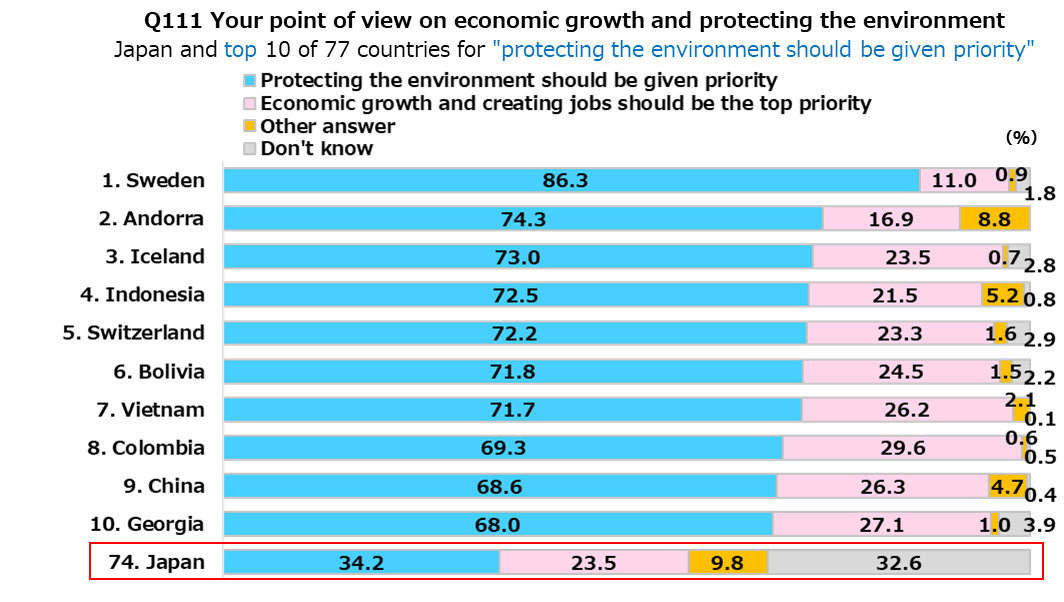 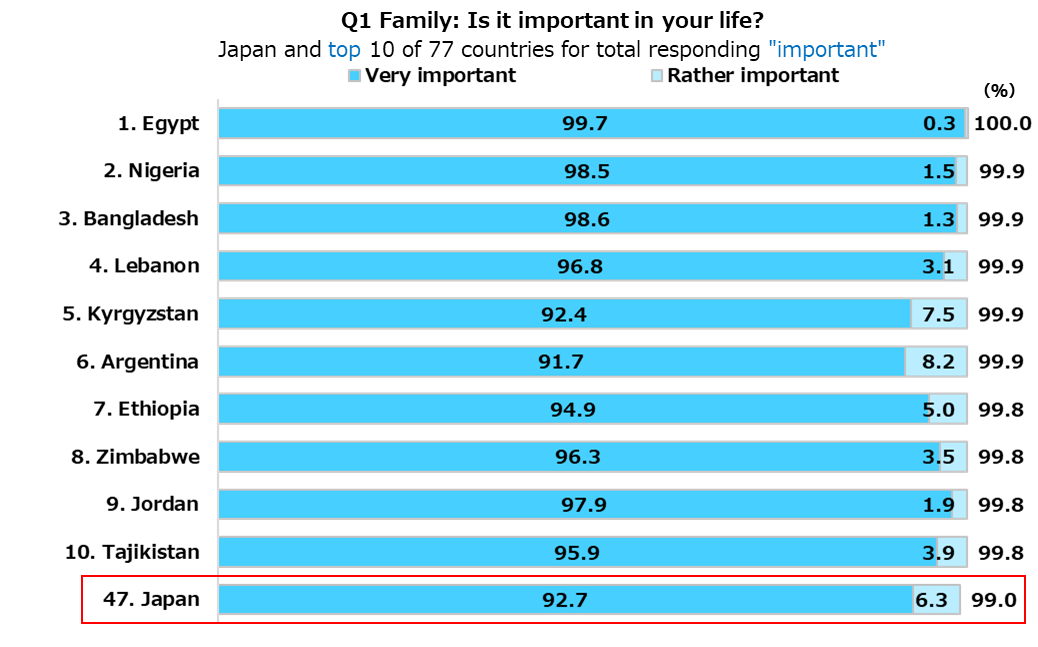 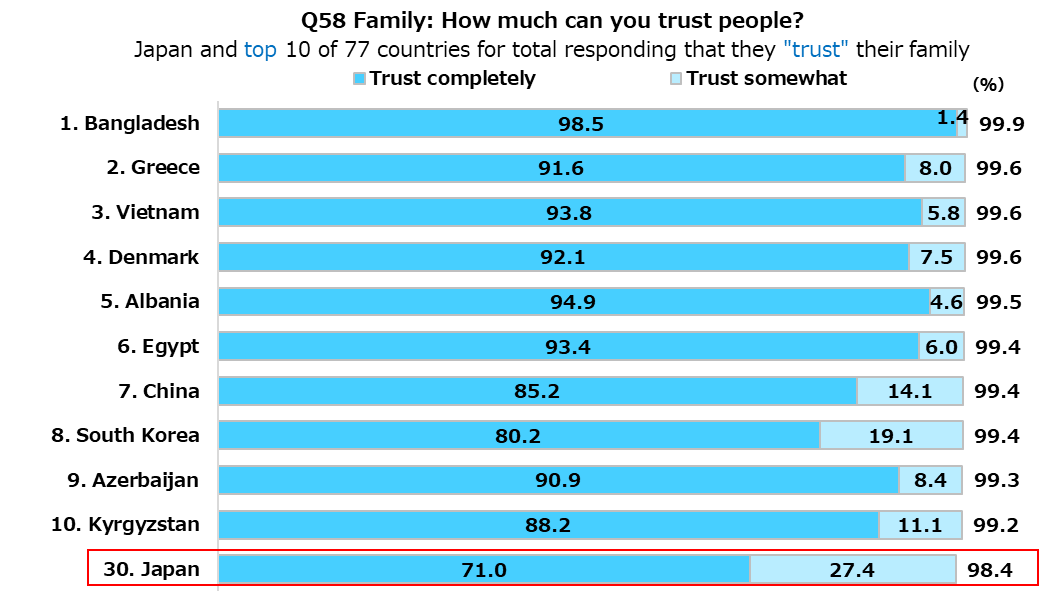 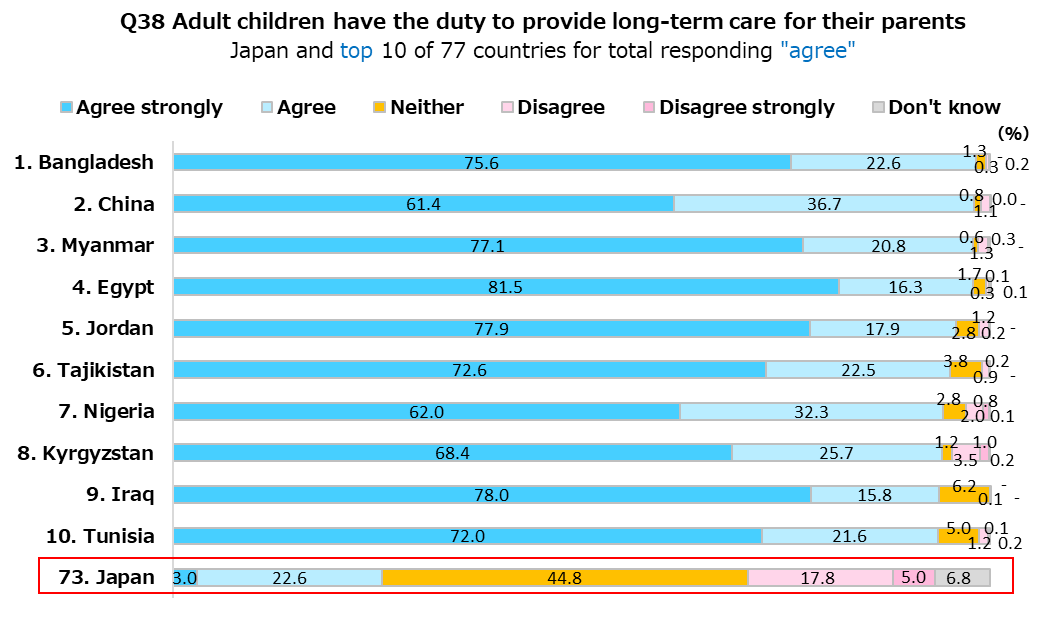 9. Next generation: Emphasis is placed on children learning qualities such as “determination” and “imagination.”
Looking at the “qualities that children can be encouraged to learn at home,” the percentage of Japanese respondents who placed importance on children learning “hard work” was 25.1%, ranking low at 68th of 77 countries. Likewise, the percentage for “obedience” ranked lowest of 77 countries. In contrast, for the qualities “determination, perseverance” and “imagination,” Japan ranked high at 2nd of 77 countries and 7th of 77 countries, respectively. This suggests a tendency to desire children to grow up decisive and capable of exerting their creativity, as opposed to diligent or obedient. 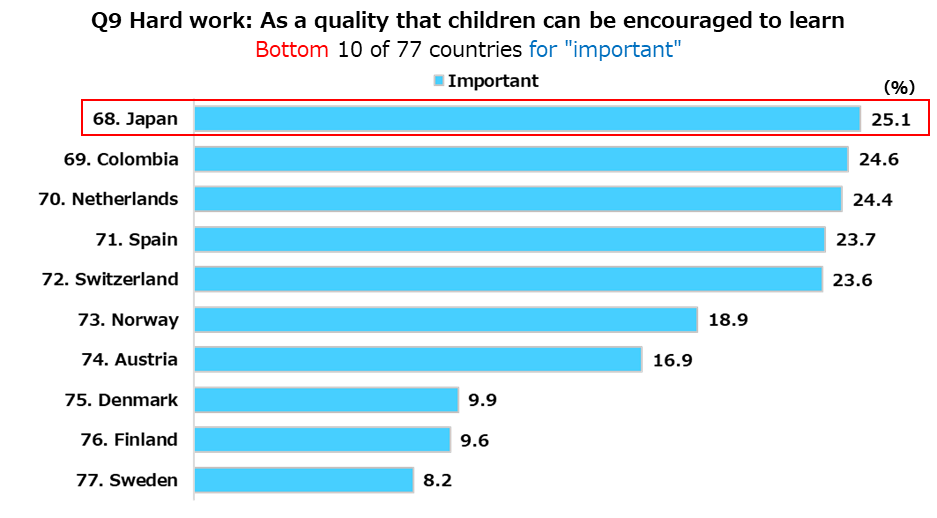 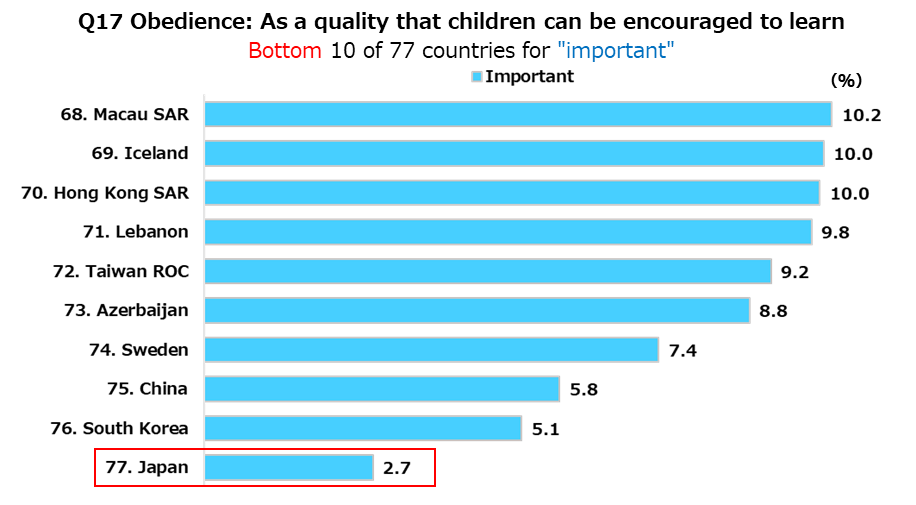 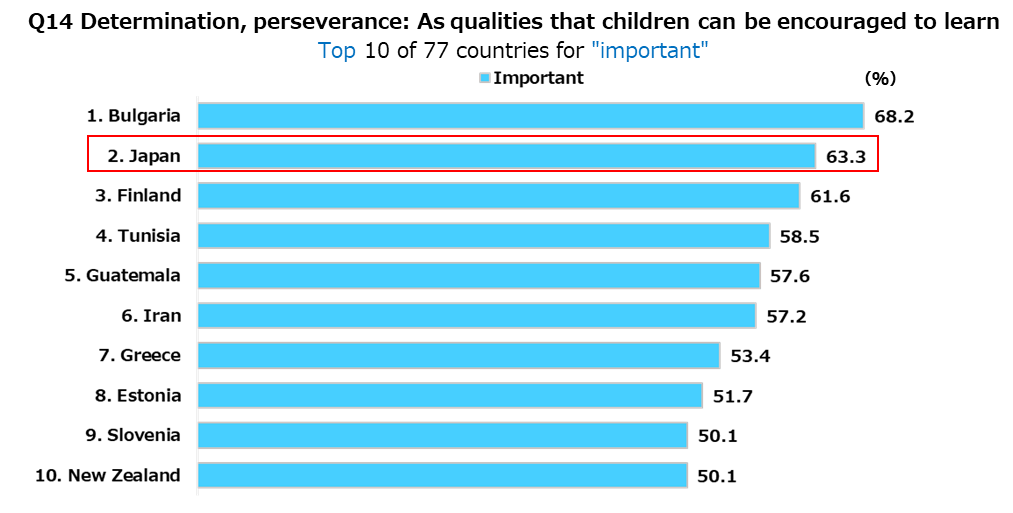 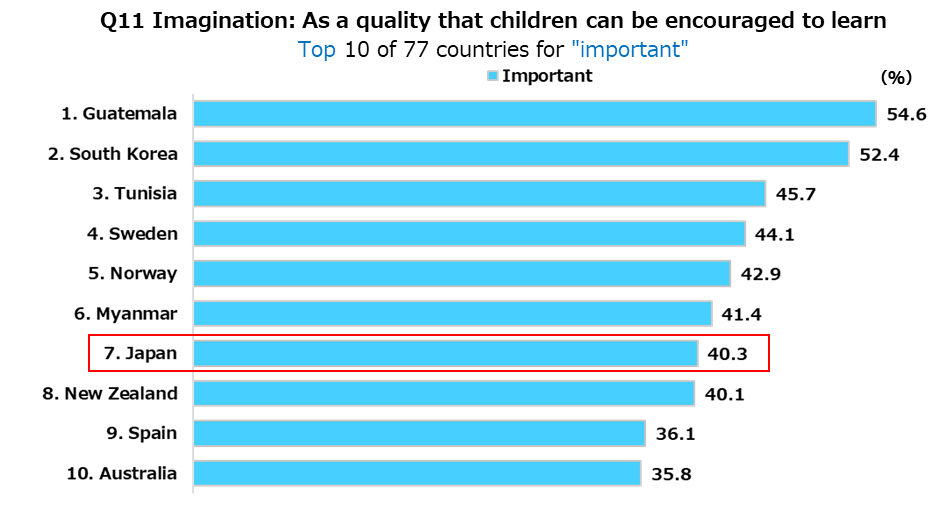 *See the survey report for a wider range of topics and details of the rankings.
The report can be downloaded free of charge at the Dentsu Institute website mentioned below. (Japanese)
URL: https://institute.dentsu.com/articles/1706/ 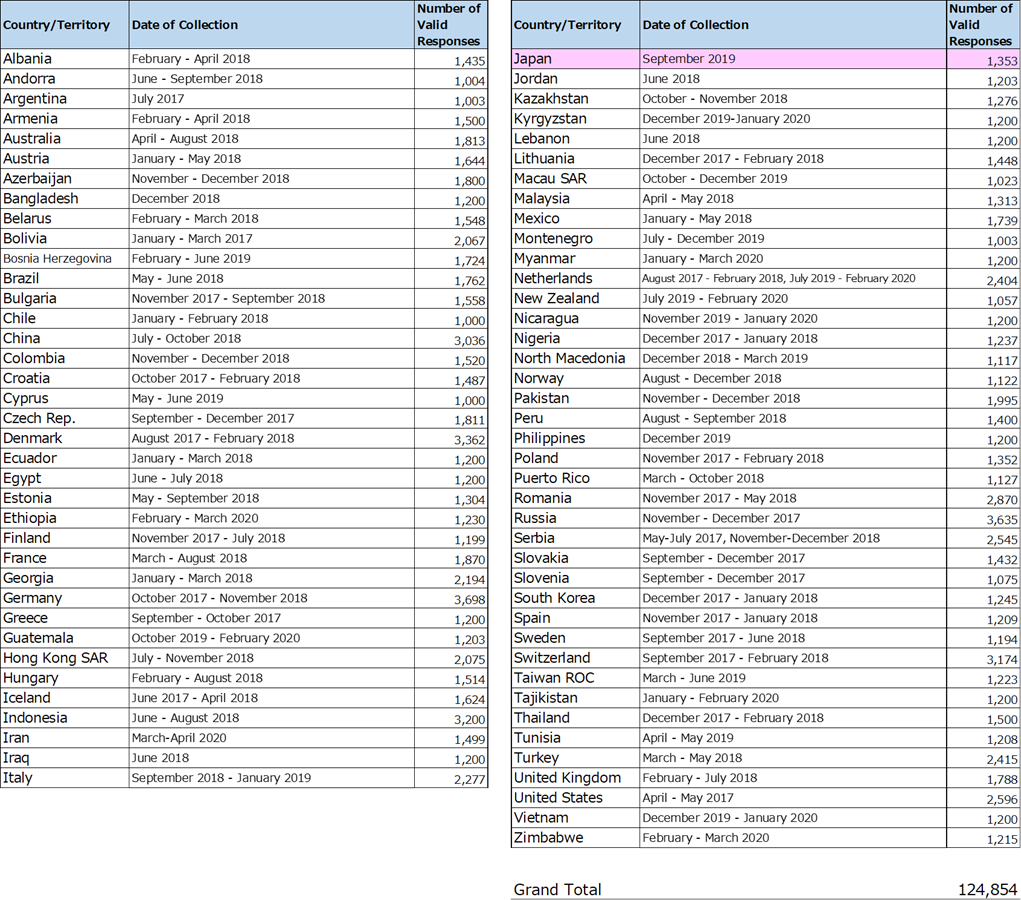 We explore the scenarios for change toward desirable visions for future society under the theme of “Quality of Society.” In order to do so, it is necessary to pursue further analysis of Japan’s unique contradictions and conflicts revealed by this survey analysis. Dentsu Institute and the Ikeda Laboratory have been accumulating international data and insights regarding peoples’ values for around 30 years. We welcome inquiries from those with interest in such topics and any opportunities to further explore these topics together in the future.

Inaugurated as an internal organization of the Dentsu Group Inc. (pure holding company) in January 2020, Dentsu Institute has continued to be engaged in activities under the theme of “Quality of Society” since April 2019.
In order to identify what changes are occurring in people and society and explore possibilities for an ideal future and ways to bring it about, the Institute is focused on the accumulation of knowledge and insights from pioneering and unique perspectives, by taking part in, for example, the World Values Survey.

[Media contact]
Group Corporate Communications Office, Dentsu Group Inc.
Tel: +81 3 6217 6601
E-mail: group-cc@dentsu-group.com
As part of its response to the outbreak of COVID-19, Dentsu Group Inc. has moved to a remote work environment. If you need to contact us during the remote work period, please email us at the address above.